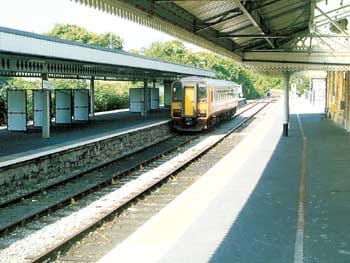 Transport for Wales (TfW) is advising customers not to travel by train today (Tuesday) or Thursday, June 23 and Saturday, June 25, with the majority of their rail services suspended as a result of industrial action resulting from the dispute between RMT and Network Rail.

Due to the wider disruption caused, they’re also advising customers to only travel by rail if essential for June 22, 24 and 26.

TfW is not in dispute with RMT, but the industrial action means they are unable to operate rail services on Network Rail infrastructure.

On June 25, this will be reduced further to services between Radyr and Treherbert, Aberdare and Pontypridd, with replacement buses in operation between Radyr and Cardiff Central, and between Pontypridd and Merthyr Tydfil due to the ongoing transformation work for the South Wales Metro.

All other services will be suspended, as signalling and other infrastructure work is managed by Network Rail, who are impacted by the industrial action.

Full details of the timetable for these days can be found on the TfW, Traveline and National Rail websites using the journey planners.

Customers with existing non-season tickets valid for travel from today, Tuesday, June 21 to Saturday, June 25 can use those tickets any time this week until Monday 27 June. Alternatively, customers can claim a full refund, with no admin fee charged. Season ticket holders can apply for compensation via Delay Repay.

In the meantime, TfW has suspended sales of Advance tickets for the first three strike dates in order to minimise the number of people disrupted. Customers are advised to continue to check the TfW or Traveline websites, and those of other operators, for updates.