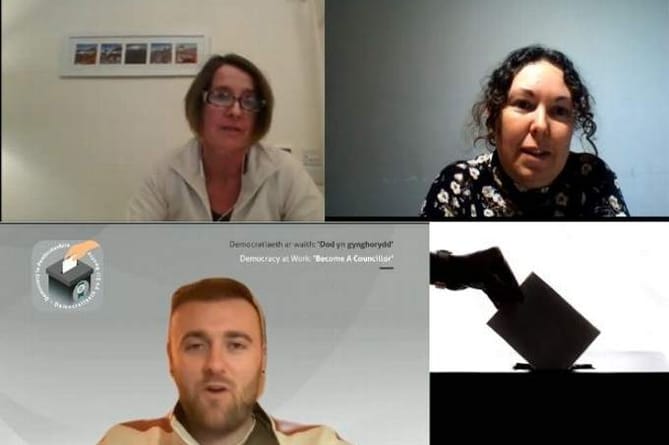 Also on hand were democratic services and election team officers including Sue Saunders who introduced her departments work and outlined how council meetings are run as well as what support is available to new members.

All three councillors were elected in the last election and they were keen to reassure anyone who wanted to get involved that although it could be “daunting” there was support available and officers available to answer questions, help with technology and accessibility.

Council meetings are scheduled in advance, and the new way of working – with hybrid meetings planned – meant that there was more flexibility, less travelling and even the option to log into meetings while at work if employers agree.

Clr. Clements highlighted the importance – and amount – of reading involved with the job to ensure councillors were prepared for meetings, adding there was also a high chance of “getting your ear bent” when out in your communities.

All three said that making big decisions weighed heavy and they spent a lot of time thinking about bigger issues.

“It’s not just potholes and dog fouling,” said Clr. Bateman. “We are making some really big decisions that have a real impact on people’s lives and sometimes those decisions aren’t easy.”

Key to their decisions to stand was a passion for their local communities and a desire to improve them, “knowing you have helped people in your community, that gives you the ultimate satisfaction,” said Clr. Clements.

Being a councillor calls for you to “be the bridge between the council and the community,” added Clr. Beynon, who announced on the weekend that he wouldn’t be seeking re-election this May.

In a post on his Facebook page, the county councillor for the Llanion ward, stated that he realised that he needed ‘some time away from the public eye’ to pursue new ‘adventures’ - whilst also referencing the ‘modern day abuse and harassment’ in politics, as reasons why he wouldn’t be standing for election in May.

To find out more about standing in May’s election visit https://www.pembrokeshire.gov.uk/councillors-and-committees/interested-in-being-a-councillor