The Save Withybush Hospital Campaign is issuing a local ‘Call to arms’ ahead of Senedd debate showdown. 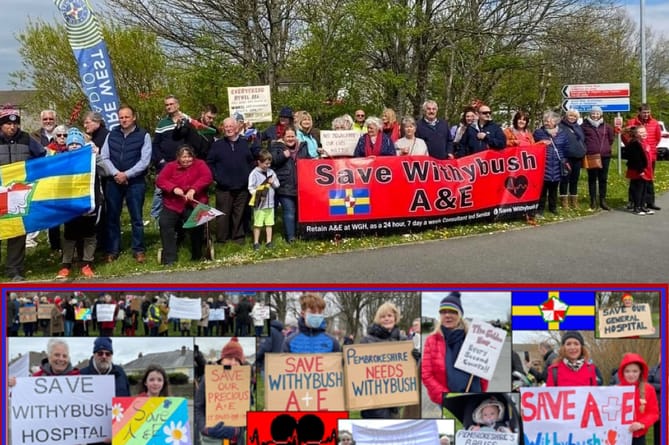 Campaigners determined to save the A&E at Withybush hospital have announced that they will be ramping up efforts to engage local support for the hospital in the run up to the Senedd debate, which is to be held on Wednesday, June 29.

The debate comes following the recent Save Withybush A&E petition topping the 10,000 signatures needed for it to be considered for debate. With such strong support, now sitting at over 11,000 signatures, campaigners were offered the opportunity to close the petition early, so that it could go directly to a debate in the Senedd prior to the summer recess.

With the petition demonstrating such overwhelming feeling on this issue, campaigners say that they are now issuing a local “call to arms” ahead of the debate. They are describing this as a rally cry for local residents, Town and community councils, Trade Union branches, County Councillors and anyone with concerns over the proposed downgrades to the hospital to take action and to make their voice heard in the run up to the debate.

“We have created several ways which people can help, We have created a Model Motion in support of the campaign which we are asking Town Councils, Community Councils and Trade Union branches across Pembrokeshire to carry at their meetings.

“We’d also like to thank Fishguard Town Council who are already canvassing their electorate with regards to passing a motion defending Withybush.  We urge County Councillors to support a similar motion which is currently being considered by Pembrokeshire County Council. We’ve created an email template which we ask residents to send to their Local and Regional elected MS’s. We need to let our elected reps know that united we will defeat these dangerous plans to take away our A&E.

“Voluntary researchers have also joined the campaign and have helped to create a briefing paper which will be sent to all the relevant MS’s so that they can contribute to the debate, fully armed with the facts, and in full knowledge of the dangers these proposals pose.”

The hard-hitting Briefing Paper highlights several areas where Hywel Dda Health Board’s proposed changes would put people at risk and have not been properly thought out, including concerns over the safety of workers within Pembrokeshire’s more dangerous industries such as farming and the oil refinery. The paper also cites the impact the changes would have for people who do not have cars and who simply could not rely on Pembrokeshire’s poorer infrastructure and public transport links if the changes ever went ahead.

“Under the Future Generations Act, which which is a brilliant piece of legislation adopted by Welsh Government in 2015, the Health Board has a legislative obligation to engage in co-production of services while drawing up proposals like this, our paper shows unequivocally that they have failed to do this because the various public consultation processes have not used the correct methodology. It’s all very well having brilliant ideas, but it’s not much use if those ideas are not being properly implemented which puts people’s health and lives at risk.”

The paper concludes with what campaigners describe as “damning insights” into the Health Board’s Financial motivation for the downgrades with the following words:

“It is well known that HDUHB had been placed in targeted intervention, and is still under enhanced monitoring (last assessed February 11, 2022) for financial mismanagement. We understand that there needs to be a business case presented to fund such wide scale changes; but the proposals are suggestive of making decisions based upon financial considerations rather than health need and population well being.

“HDUHB has three times issued public statements regarding pressure on services requesting the public stay away and cite recruitment problems as background issues to the proposals. Whilst these are pressing matters; they should not form the basis of decision making that risks universal access to that most basic health service- critical care.”

All of the ways which people can get involved, including how to email their local Senedd Members can be found on the Save Withybush Facebook group, or alternatively people can email [email protected] for a copy of the template letter to send to their MS’s.

The Save Withybush campaign urges all concerned to email or write to their MS’s and for all Town and Community Councils to adopt their model motion in defence of the hospital adding:

“There seems to be a misconception among the executive of the Health Board that these proposals are some kind of ‘done deal’, they are not, the Board will soon learn that Pembrokeshire is prepared to fight them at every level to stop these dangerous proposals and that with our collective voice we will remind them that their job is to provide universal access to health services inline with the original principles of the NHS, currently they are not doing that, instead operating more like a corporate body which has lost its way.”