This World Bee Day (May 20), look out for solitary bees 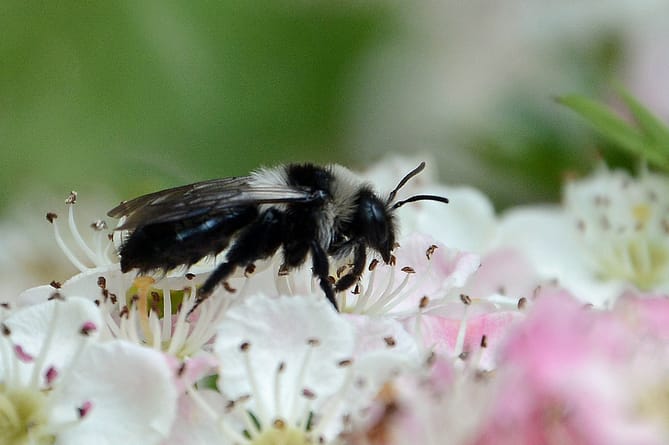 This WORLD BEE DAY (May 20), look out for solitary bees and help scientists better understand declines.

While bumblebees and honeybees are familiar to many of us, solitary bees are often overlooked. In fact, 90% of the UK’s bee species are actually solitary bees, with around 250 solitary bee species, only 24 bumblebee species, and just one honeybee species. Many of them carry charmingly descriptive names, such as the hairy-footed flower bee, the bristle-headed bee and the pantaloon bee.

Solitary bees, like many other pollinators, are believed to have declined in recent decades, due to factors including habitat loss, climate change, and pesticide use. But a lack of coordinated monitoring means that not much is known about the status of many species. Scientists at the Game & Wildlife Conservation Trust (GWCT) working on the EU-funded BEESPOKE project, are hoping that a new free, downloadable guide to solitary bees could help.

“Solitary bees tend to be much less well known to people, or can be mistaken for wasps, hoverflies and honeybees, so have been harder to monitor. The new BEESPOKE guide, ‘Solitary Bees of the United Kingdom’, is free to download and gives detailed information and photos to help people identify different species,” said Dr Lucy Capstick, post-doctoral researcher at the GWCT’s Farmland Ecology Unit.

More than £100,000 available to local projects via Sustainable Development Fund

Transform your community with a free garden package

“Solitary bees are essential for pollination – an ecosystem service that contributes around £690 million to the UK economy every year, so it is important that we monitor them better to help us understand the factors affecting them and put appropriate conservation measures in place.”

There is some hope that bees are adapting to environmental changes by processes such as range shift, where a species changes its distribution to adapt to changing climate conditions, for example moving northwards or to a higher altitude as temperatures increase. However, it is not certain that they will be able to adapt at the same rate as the climate changes. Long-term nationwide monitoring would allow scientists to see if these range shifts are occurring in solitary bee species and what effect it is having on their populations.

As the name suggests, solitary bees mostly nest and work alone, with the female making her own individual nest where her eggs are laid and left to hatch and mature by themselves.

Rather than having pollen baskets (corbiculae) on their legs as social bee species do, they instead have scopae. These are an array of modified hairs on the hind leg, designed for carrying pollen. They are not as highly developed as the social bees’ pollen baskets and so solitary bees lose much more pollen as they fly, indirectly dispersing pollen to a large number offlowers and pollinating them.

In comparison to honeybees, solitary bees are able to stay active in colder temperatures, so can be more efficient pollinators, and in some cases can pollinate plants that honeybees and bumblebees are unable to. For example,many plants in the Apiaceae family such as carrots, parsnips, or parsley, rely on solitary bees such as mining bees (Andrena), plasterer bees (Colletes), yellow-faced bees (Hylaeus), nomad bees (Nomada) and base-banded furrow bees (Lasioglossum), along with hoverflies and beetles, as honeybees and bumble bees are too big.

Many solitary bee species can be seen foraging from early spring, with male hairy footed flower bees (Anthophora plumipes) being seen as early as February and the females following two to three weeks later. Some of the more common species include the red mason bee, patchwork leafcutter bee (both of which may inhabit a bee hotel in the garden), and the ashy mining bee. The new guide gives information about when each species is likely to be seen as well as their distribution and identifying features.

“Anyone who spots a solitary bee can easily upload their sighting with photos to online databases such as iNaturalist, where they can be verified by an expert, or you can submit your records directly to BWARS (Bees, Wasps & Ants Recording Society). The UK Pollinator Monitoring Schemehas also been established, which details how to carry out various pollinator surveys.

“We would love to hear about your sightings, so why not tag us in your photos on Facebook @BeespokeNSR or @gamewildlifeconservationtrust.”

Download ‘Solitary Bees of the United Kingdom’ from https://northsearegion.eu/beespoke/publications-downloads/