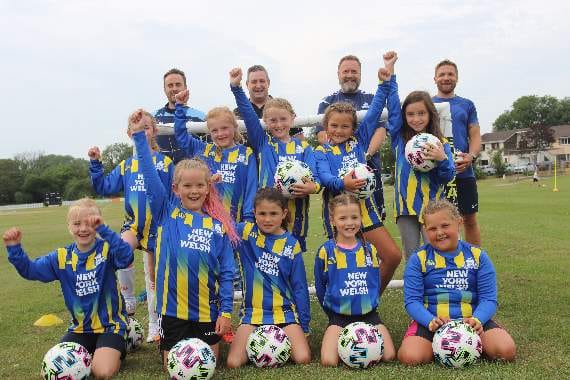 The girls with their new kits alongside the coaches and sponsors

As with all grassroots clubs, sponsorship is invaluable at Kilgetty AFC and it’s thanks to the generosity of New York Welsh that the newly formed Kilgetty AFC Girls Football teams all have new Kilgetty AFC football shirts!

Ty Francis MBE, former Tenby Greenhill school pupil and former vice-president of the New York Stock Exchange, is a founding member of New York Welsh. The organisation was set up to raise money for grassroots sport in Wales, with a focus on promoting minority sports, especially organisations delivering girls and disability sport.

New York Welsh have previously sponsored the Under 14s girls football at Kilgetty and when Ty heard about the new girls’ training sessions which take place term time on Tuesdays at Kilgetty AFC, with over 70 girls aged between five and 12 taking part, New York Welsh kindly offered to sponsor their football shirts too.

Whilst Ty was visiting Tenby with his wife and children, they attended the Kilgetty girls’ training session, which included kit presentations, team and group photos.

“The girls were so excited to receive their new kits. It’s thanks to generous donations like this that the young people have access to play football as a team. This means the girls can raise their activity and fitness levels, improving their confidence and skills, have fun and make friends too. We are so thankful to New York Welsh for their amazing sponsorship!” shared the Kilgetty AFC girls’ coaches.

The girls’ training sessions resume in September when it is hoped that, thanks to having new football kits, the teams will be able to play matches against other teams in the Pembrokeshire Women’s and Girls League.

Kilgetty AFC Juniors run lots of training sessions which will resume in September. If your child would like to join Kilgetty AFC, call Lukas on 07870 163378, or for specific age groups please see details below:

Kilgetty AFC require coaches for six to 13-year-old girls’ training which takes place term time, Tuesdays at Kingsmoor Sports Field, 5.30 to 6.30 pm. DBS and club registration will be required. Call James to register your child or to sign up as a coach, tel. 07872 594290.

Kilgetty also hope to start an Under 8s mixed boys and girls team, with the first session taking place on Thursday, August 5, at 5.30 pm in Kilgetty.

Training cost is £3 per player, per session.