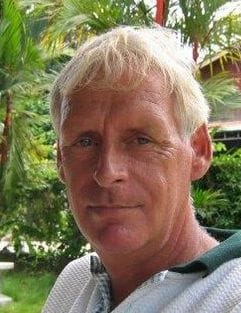 Family are sad to announce the death of Stephen Brown, aged 64, in Thailand following a short illness.

Stephen grew up between St. Florence and Carew and went to Greenhill School, Tenby. In his youth he played football for Manorbier and Carew and then rugby for Tenby and Pembroke Dock Quins.

Summer seasons were worked at Kiln Park and on leaving school he worked for many years at Pembroke Power Station and in 1984 became the proud father of Gareth who he spent many happy camping trips with and passed on his love of adventure and travel.

Upon the closure of the power station, he moved north to Drax and then further afield to Kuwait, Pakistan and New Calendonia, he made many friends along the way, before taking early retirement and settling in Malasia where he bought a boat. He soon got bored and ventured into building catamarans and running tourist trips, one of which ended with the captain sinking the tender along with the passengers and their expensive camera equipment. Having to fire the captain he decided it was no longer for him and was time to again retire.

He with his partner Noi then moved to Bandung Udon in Thailand where they took up duck farming. Finding rice planting back breaking work he was first to volunteer to man the beer tent, no surprise there! In 2015 he astonished himself by thoroughly enjoying becoming a hands-on father to Baifern who brought him much joy and happiness.

A good man, a kind man he will be missed by his son Gareth & wife Becki, daughter Baifern, and grandchildren Evie Rose and Oliver, sisters Christine and Gail and their partners Mervyn and Graham, along with his nephews, nieces, and many, many friends.