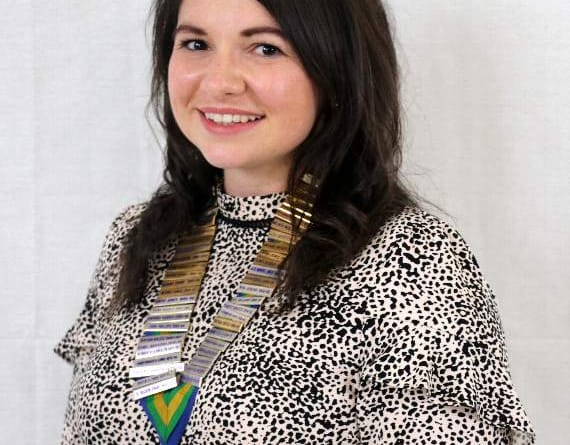 Katie Davies from Pembrokeshire YFC was elected as the new Wales YFC chairman for the forthcoming year at the annual general meeting in Aberystwyth last week.

Katie joined Llys-y-frân YFC in 2002, and has developed a prominent role in the YFC at all levels. She became chairman of her local club in 2017, progressed to county chairman in 2018, and has now completed the triple, becoming Wales YFC chairman for the coming year! She’s had great achievements within Pembrokeshire, winning both Junior and Senior Member of the Year competitions, and in 2014 became their Rally Queen.

Katie has certainly made the most of the opportunities offered during her time in YFC. She has competed in a wide variety of competitions at both county and national level, including Stock Judging, Public Speaking, Tug of War and Flower Arranging. YFC has also given her the opportunity to travel: In 2012, she travelled to Scotland through the Wales YFC International Programme, and will travel to Patagonia through the programme this autumn.

Aside from young farmers, she works as an agricultural advisor with the firm Agri Advisor in Pumsaint.

Coast walker Jim in Pembrokeshire for last leg round Britain

After being elected as chairman, Katie said; “It is an honour to be elected chairman of the Wales Federation of YFC. I am looking forward to meeting as many members from across Wales as possible. The last 12 months as Wales YFC vice-chairman has given me the opportunity to travel to different counties to meet the members, and I look forward to continuing to do this. I am also looking forward to continuing to work alongside our team of enthusiastic officers and staff, ensuring that the movement continues to go from strength to strength.”

As part of her ‘Chairman’s Challenge’ this year, Katie announced that she would like to work to raise awareness of mental health issues amongst young people and the agricultural industry.

Caryl Haf, Ceredigion YFC, was elected as vice-chairman for the year. Like Katie, she too was chairman of her county last year.