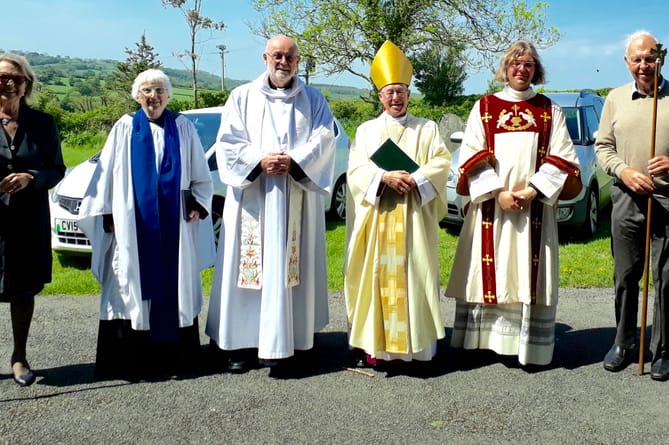 The Church of St. Andrew in Narberth and the Church of The Holy Cross in Robeston Wathen celebrate during the month of May the 700th Anniversary of the establishment of their Rectory (or Benefice).

On Sunday, May 15 there was a joint Benefice service at St Andrew’s when Bishop Wyn Evans celebrated the Eucharist and spoke about the history of the church in Narberth, the many contributions by successive Rectors over the years and the past, present and future importance of worship and service in the local community.

A large congregation from the four churches in the Benefice, along with many Narberth residents, attended to hear Bishop Wyn’s address and join in the commemoration of this historic occasion. A service to celebrate at Holy Cross Robeston Wathen is planned in coming weeks.

A recent publication by congregation Elaine Lidgate tells us that both Churches were built before 1291AD, since both are mentioned in a list of Churches in England and Wales which was commissioned by Pope Nicholas IV. Whilst both were originally separate chapelries, it is thought that they were joined into a single Rectory under the influence of the land holder at that time, Roger Mortimer. Originally, a Rector was a priest entitled to the tithes of the parish (a tenth of everyone’s income), as opposed to a Vicar who received a salary. Narberth and Robeston Wathen were wealthy areas, hence the establishment of a Rectory, in the King’s gift. On May 11, 1322, Hugh ap Griffin was appointed as the first Rector on behalf of Edward II.

Reminder of a bygone era at Pembroke Dock

Music festival gets underway in Pembrokeshire

Curiously, local legend says Sir Andrew Perrot built the Church in Narberth, hence the dedication to St. Andrew. However, there is no record of the Perrot family in the Narberth area at that time, and there are references (in 1383 and 1397) to the Church of St. Mary in Narberth. The name may have been changed during the Reformation in the 1530s but there appears to be no record of this. We do know that by 1609 (as reported in a survey by Gilbert Thacker) regular fairs were held in Narberth on St. Andrew’s day, November 30.

Over the past seven hundred years, the joint Rectory has been served by over 35 dedicated priests who have each added to the rich history of the Church in Narberth. The Benefice has now been extended to include other churches - St. John’s Templeton and St. Womar’s Minwear, and St. Teilo’s church Crinow, which sadly closed in 2012.