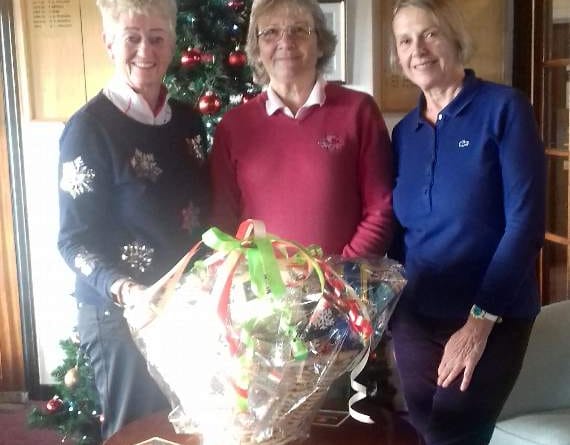 Trevayne on the left, Dinah in the middle, and Captain Bev on the right

December arrived along with Turkey Trot season. The first of those Trots took place on Sunday the 2nd when four ladies decided to take part. Gill John won with a score of 28, one ahead of Olivia Bradbury in second place.

Unfortunately, due to the weather, the next Trot didn’t take place until Thursday the 13th. The conditions were poor with gales pounding the coast at 45 to 50 mph, accompanied by heavy rain showers, which resulted in most of the ladies deciding to stay in the clubhouse having a cuppa and wondering why the nine had bothered battling the elements!

The scores reflected the difficulty of the day, with the best coming from Carol Beecher with 21 points (over 15 holes), with Louise Hill coming second on countback from Sue Ensor and Angie Gottwaltz - all scoring 19 points.

The next competition was held on Thursday the 20th. It was a 15-hole stableford and 17 ladies played. Conditions were testing with a south-westerly wind which generally proves difficult. Despite this, the best score of 31 was carded by Sue Ensor, with Pam Cole beating Maura Gunning to take second place on countback, both scoring 27 points. Beth McMann scored the only two of the day, on the shortened par three 18th hole.

To conclude the December fixtures - and the last competition of the year - 10 ladies decided to walk off the Christmas turkey overload with a 14-hole stableford on Thursday the 27th. It was another breezy day and scores were very tight at the top.

After everyone had had some lunch the ladies’ captain, Bev Owen, and ladies’ secretary, Trevayne Keohane, made the draw for the Christmas ‘Italian-themed’ hamper, which had been running for a number of weeks. The winner for 2018 was Dinah Reed and she is pictured with Bev, Trevayne and the hamper. The hamper draw has helped to raise £119 for Bev’s chosen charity - the Marine Conservation Society.

All that remains for me to write is ‘Happy New Year to all the readers of the Tenby Observer’. I wish you all good health for 2019 and, for all you golfers out there, a very successful golfing year with lots of pars and, hopefully, a few birdies as well! I’ll get back to you all next year.

Ten years ago, it was my privilege to be captain of the ladies at Tenby Golf Club. After the last mixed game of the summer, Chris Beecher said it was a shame that we had no more mixed games until February, why didn’t we have one in the Christmas holidays, between Christmas and New Year? He offered to sponsor the event, and so it began.

Chris kindly continued to sponsor the event for another five years, when Steve Williams and Vernon Lawrence took over. However, in these difficult times, it has been harder and harder to get sponsors, so the Mixed committee decided this year that they would sponsor the three prizes so that all entry fees and raffle money could go to the charities.

Club captain Nick Allen has chosen Ty Hafan for his charity, which he told us all about, including why it is a charity close to his heart, it being a children’s charity.

Ladies’ captain Bev Owen has chosen the Marine Conservation Society for hers. In these days of greater understanding about the curse of plastics in our society, her charity takes care of the conservation of our beaches. Thanks to both captains and Nick’s wife Gwen for their hard work in running a very successful raffle, which raised £142. Entry money of £260 was then added to that, so each captain had £201 for their respective charities to start their year. Thanks to all those who donated some lovely prizes.

Thanks also to Mervyn Tucker for donating balls for the twos. Three 2s were recorded on the day, all on the 17th, so each pair had four Pro V1s each. They were John Hancock and Sue Griffiths, Jerry Whitehouse and Sarah Phillips, and Chris and Issie Lawrence.

So, to the scores. Twenty-six pairs took part. Thanks must go to Steve Williams and John Ball who had no lady partners, but marked their playing partners’ cards. Two pairs just missed out on countback. Idwal David and Georgina Ormond, and Trevayne Keohane and Alan Webster had 36 points, but were beaten to third place by Chris and Carol Beecher. The top two pairs played together, and scored the same points, but Sarah Phillips and Jerry Whitehouse were pipped by one point on the back nine into second place by Angie Gottwaltz and Roger Schooling - both getting an overall 38 points.

Congratulations to all 2018 winners, and we look forward to getting some new names on the board in 2019. The first game to look out for is the Valentines Mixed which will be held this year on Sunday, February 17.

Finally, a big thank you to Laura for her running of the computer, to Tom in the Pro Shop, and Lee and his helper in the bar. It all helped to make a very successful day.

A cut for Christmas...

On the fifth day after Christmas 21Twixmas Rabbits (plus two welcomed guests) went a- golfing hoping not to earn themselves a partridge in a pear tree, but a few pennies towards replenishing their empty wallets after the festive fund-draining, writes our links reporter, Warren Hacker, but would anyone get a handicap cut before the New Year?

The draw provided five groups of three then two groups of four - led off by Rabbits captain Steve W, Rees (Winter League winner 2005) and John B (winner in 2014); next were Gareth, Keith and brother-in-law Frank (who’d beaten him on countback last week - could he do it again?); third were Phil, Peter and last week’s winner Will Twice; the fourth group contained Steve C (who won back in the last century), treasurer Wyndham and son-in-law Joe (it’s been six years since he last played!); after them came former captains Paul (2017) and Chris (captain in 2007 and winner in 2006 and 2009) with new Rabbit Alan Barber; the first fourball group consisted of Grant, Mike (the last two Winter League winners), alongside Adrian and Robin, with the final group being Ian W, Shaun, Tony and Bill B (who won it in 2004).

The mizzle showers that passed through at regular intervals hadn’t appeared on any forecast and was something of a nuisance as it meant brollies went up and down and waterproofs went on and off, and it gathered on the greens making many putts pull up short. It also meant that no-one would sign for a blob-less round.

The captain held the early clubhouse lead with the other two outside the top 10, but his score paled into insignificance when Keith inputted his card - 22 points (with a blob) on the front nine and a seven-over-gross back nine of 24 points would be VERY hard to beat (but, more importantly, he beat b-i-l Frank to earn the bragging rights - although Frank was using borrowed blades and not on his home course and still had 67 in his two rounds!).

Will Twice couldn’t replicate his winning performance from seven days ago (he scored less on 18 this week than he managed on the back nine last time), but the other two got a top half finish. Joe almost got a point-and-a-half a hole and the treasurer was beaten on countback to not quite be ‘best in the group’. Paul’s back nine was third best of the day and he’d be on the ‘podium‘ and Alan’s inaugural outing resulted in a top five placing - not bad for someone who stands the wrong side of the ball when he plays!

The first fourball couldn’t find a way to force themselves into the top half, but threequarters of the final four could and the same percentage were financially rewarded when the results had been computed.

Captain Steve announced the placings and the treasurer obviously felt the ‘season of goodwill’ and spared enough cash from the funds to give money to the top four places - Shaun’s 36 pipping Virgin Rabbit Alan to fourth on the back six to get his money back, and ex-captain Paul’s 38 was good enough for him to stand in the bronze place on the podium.

When the announcement continued ‘..and in second place is the long-time leader...’, it was clear that Keith’s score hadn’t been the best of the day - it was good enough to leave him as runner-up on countback on the back six - his 17 points one less than the winner. Who was to be crowned as the final ‘Rabbit of the Week’ for 2018? Step forward and soak up the applause Mr. Ian Williams! The practice and Tom’s lessons are paying off. Not only did he win, but he received the plaudits in front of his wife and friends! As a result, Ian’s handicap has been slashed by 3.5 to 29 and Keith’s has been sliced by 2.8 to 24 - very well played both.

The Twos Pot was shared equally this week after Tony’s long putt on the 17th dropped in and Steve C slotted his chance on the shortened 18th. In the ‘Dead-Eyed Dick’ contest, Steve C now leads with three twos - the Mitchell Brothers (Phil and Grant) the other multi-two-getters of the 16 twos scored this season so far (including one by guest Frank last week).

On the Eclectic front, three didn’t improve and nine went up by one, but bigger betterments came from Peter and Keith (up two each), up three from Tony, Will and Paul, up by four from Gareth, up by seven from Bill B and Ian, with Alan putting his first card in up 36! Paul increased his lead at the top to five (10 four-pointers in the score of 63), ahead of Robin (58), with Adrian, Shaun and Rees all on 57 (but Tony in 21st place is only 10 behind that, so big climbing could be easily achieved).

The training and practice for the contest on January 13 against‘’The Others who play on Sunday’ are going well, with visits from renowned sports psychologists and PMA instructors very enlightening. They have also been honing their physical shape in readiness for the challenge ahead and they have shunned the chocolates and puddings that have been on offer in the recent weeks by following a rigorous fitness regime.

Rabbit captain Steve W has been impressed by the dedication of his troop to the cause and he already has enough volunteers for nine or 10 pairs. The ‘Others’ may have lower handicaps than the Rabbits (in some cases), but it doesn’t mean they are better golfers! Come on you Rabbits!