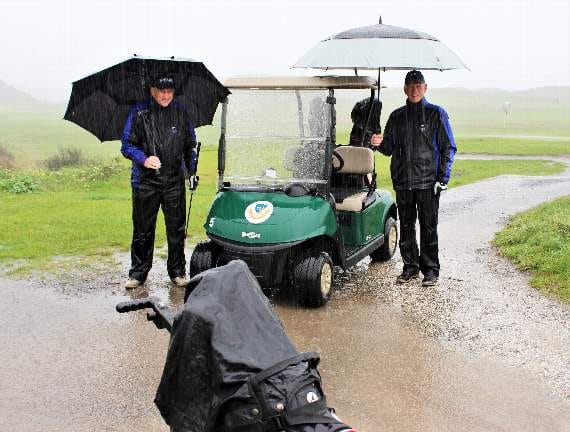 Stan Hudson and Adrian Palmer waiting on the sixth for the rain to ease.

There were a fair number of seniors who gathered at the club on Tuesday morning ready to do battle in the fifteen-hole competition, prior to the Seniors’ A.G.M.

Anticipation waned somewhat as they discussed the possibility of rain, as forecast, or not forecast, according to which programme you listened to.

Some cups were half-full and some were half-empty. A large number beat a hasty retreat while the foolhardy were brave enough to venture out into the gloom fully expecting the initial shower to fade.

Sixteen to eighteen senior golfers donned their wet weather gear expecting the clouds to part, and introduce some sunshine.

This was Derek Cole’s last opportunity to lead his team into the wilderness so he set off, fully expecting to complete his round. The rain did ease but then returned, and with a vengeance.

While the captain reached nine holes, he was unable to continue due to the amount of standing water on the greens and on the fairways. Everyone came to a standstill hoping it would ease but this was one occasion when the pessimists were the fortunate ones.

Every-one had to walk in and take a shower, some even went home to shower and change. All were back for the start of the Seniors’ A.G.M. with around thirty members present.

Between the three reports by the Captain, Secretary and treasurer all concerned in the organisation of the seniors’ section were acknowledged and praised for the organisation, energy and commitment displayed over the past twelve months.

Those actively involved in the group were able to participate in, and enjoy, a very successful Winter season, Open Day in July, away days to the Grove and the Gower Golf Club as well as a three day tour to the Cardiff area in September.

Twenty matches had been played during the Summer season involving some forty-two players. The teams were unbeaten at home and managed to earn two wins on the road. Idwal took responsibility for the South Wales Seniors Classic teams.

Unfortunately, both were knocked out in the second round. We were also represented in the Centenary Cup, held this year at Glynhir. Congratulations were extended to Steve Watkins and Mark Edwards for winning the Welsh Greensomes Competition at Morlais Castle.

In the Claret Jug competition further success was achieved by Roger Barton and Mick Seal in second place and Stan Hudson and Des Stone third.

Derek had introduced an order of merit table for the highest points earned in the Seniors’ matches and that was won by Keith Hubbard (45pts) with Allen Watts (44pts) David Rees (42) and Stan Hudson(34) close behind.

Thanks and appreciation were extended to the office staff, the catering staff and the Pro Shop for their involvement and co-operation throughout the year.

David Rees was lavish in his praise for the leadership organisation and efficiency of the captain, Derek Cole, over the year, during which time he was able to communicate with members who, for one reason or another were unable to attend.

Stan Hudson has been treasurer for many years and in presenting his report to the meeting he indicated that this was the end of his tenure. He had found someone to step into his shoes and continue the excellent work and dedication required to keep the seniors honest.

He was pleased to report that the finances were in good shape and that a small surplus enabled the committee to continue with all activities. Nine new members had been enrolled and £960 had been raised for charity. All present showed their appreciation for his efforts over the years.

An important part of the proceedings was the appointment of officers for the coming year. Mick Whale steps up from Vice Captain to Captain. To assist him in his duties Phil Carpenter was voted in as Vice Captain.

David Rees continues as Secretary while Allen Watts continues as communications officer. Ross James had agreed and so was voted in as Treasurer. Brian Waters wished to stand down from the committee so Stan was then appointed to take his place.

At the conclusion of the proceedings, Derek introduced Mr Simon Moffett, who was present to receive a donation on behalf of Prostate Cymru.

Before receiving the cheque for £760 Simon briefed the members present on the need to be vigilant and for members to be responsible for their own health and well-being. He explained how the finances may be used and was profuse in his praise and thanks for the donation, indicating how it will benefit people in Wales.

The seniors attempted to play golf on a very wet and uncomfortable morning and ended the afternoon wistfully staring out of the window at some glorious sunshine. They hope that Mick Whale will exercise full control over the conditions they play in.