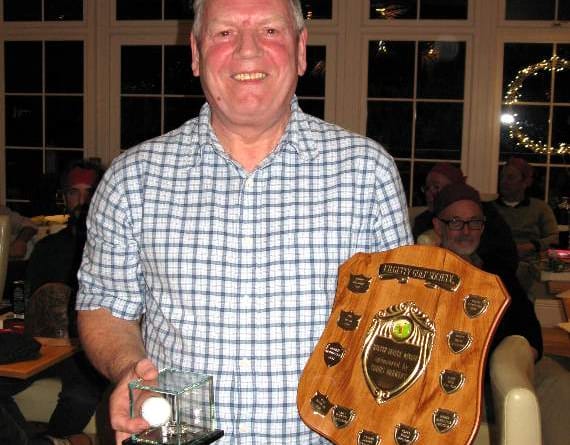 Last week, Kilgetty Golf Society held its Annual Awards Ceremony at Trefloyne Golf Club. The ‘Race to Trefloyne’, as it has been known for several years now, commenced at Cardigan last February and in subsequent months our travels took us to Pennard, Carmarthen, Derllys Court, Maesteg, Neath, Cradoc, Glyn Abbey, Bransford (nr. Worcester), Milford, and Ashburnham. An interesting, picturesque, and sometimes tough collection of parkland and links courses, some of which were totally new to us.

For those who had played six or more of these courses there were a number of awards and individual mementos. The overall champion with a superb aggregate of 209 points over his best six rounds (an average of 34.8) was Mike Slippery Skidmore with his best score of 42 reserved for Cradoc GC. Well done Mike. Good luck for the 2019 Race, but there’ll be many chasing you, such as second placed Perry Bonzo Phillips only two points, or two six-inch putts, behind on 207! Third placed John Magneto Richards had 205 points, whilst in joint fourth place were Bob Dixie Forrest and Allan Snuff Gawith, the latter slipping into the top prizes on the last round at Ashburnham, leaving quite a few others in his wake.

Others awards were as follows:

Longest Drive Gorilla - Rob The Builder Nixon who won the longest drive prize twice during the year and was always in contention.

Nearest the Pin King - was uncrowned as we couldn’t separate the 10 different winners.

Twenty-plus Handicap Bandit - the bandit this year was Martin Dangler Davies despite his moans and groans about his back!

Wooden Spoon - a fairly even spread this year with seven different winners, but John Pashmina Perrott won it overall with a certain panache!

Most Improved Player of the Year - a close run thing, but it went to the aforementioned Perry Bonzo Phillips whose quality of play has improved vastly over the year and looks set to continue in that vein.

Full results of the rce can be viewed on our website. Good luck for 2019!

Overall, 59 golfers played at some point over the year, a welcome increase over previous years and demonstrating the vitality of the Society at a time when golf generally is suffering in club memberships. Apart from golfers who are not members of any club, we had representatives from the following golf clubs -Haverfordwest, Newport Links, Trefloyne, Tenby, South Pembs, St. Davids, Rosemarket, Heron’s Brook, Neath, and visitors from further afield.