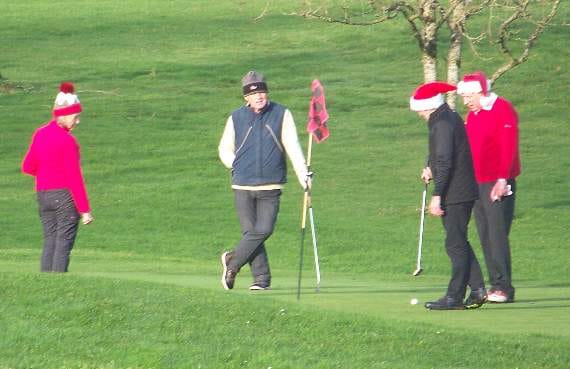 The hardy of Trefloyne Golf Club assembled in late December for the last event of the year, the annual Trefloyne Festive Scramble.

One could wonder what would attract such devotion on a grey and overcast but dry Saturday from the normally sensible golfing fraternity. Certainly not the prize money. This was, after all, more about enjoying some festive company over a convivial round of golf, rather than helping to pay off any festive excesses incurred in the run-up to Christmas.

Maybe it was the obligatory wearing of the festive headgear that inspired the turnout, which incidentally one person, who shall remain nameless except to say he gets a parking space in the club car park, had accidentally left behind.

I think it was less about the dressing up and maybe more about the fabulous bowl of Welsh lamb cawl, or soup alternative, served with some beautifully homemade bread and delicious cheddar cheese, and all consumed in the delightful surroundings of the Orangery of the Manor House, which had been dangled before us at the start - yum what a lovely way to finish off the year.

The result was less of a feature of the event, it was more about spending a few hours playing our favourite sporting pastime and enjoying each other’s company. That said, the handicap committee may wish to have a look at the members of one team who managed to generate an incredible tally of 25 points on the back nine holes, with six pars and three birdies. Rest assured the memo has been sent to look out for winners Phil Jones, Huw Jones, Roger Handcock and John Hammond in 2019, who won the event by two clear shots from our second-place crew of Robin Lloyd, Mark Ensor and Mike Ansell.

Whatever the scores, it was a great way to round off a good year for the golfers of Trefloyne, who can now look forward to the delights of the 2019 season with all that it will bring. I suspect there will be a few Santa gifts making their way onto the greens and fairways of the course, and with the new Trefloyne greens team getting stuck in as well, we expect the course to present itself in a superb way for our members and guests during the year.

In 2019 we will be giving more details of the new membership options, as well as the plans for a new members clubhouse, which will include some exciting additions for golfers and non-golfing members alike, as well as introducing our new greens team who have joined Trefloyne from The Belfrey Golf and Resort Centre and Southerndown Golf Club, both prestigious golfing venues.

Anyone wishing to join Trefloyne or know more about our membership options is invited to call the professional on 01834 845639, email the club at [email protected] or visit our website at www.trefloyne.com .

Anyway, from all of us here at Trefloyne to every golfer at whichever club you may play, we wish you a wonderful 2019 and a great golfing year ahead.