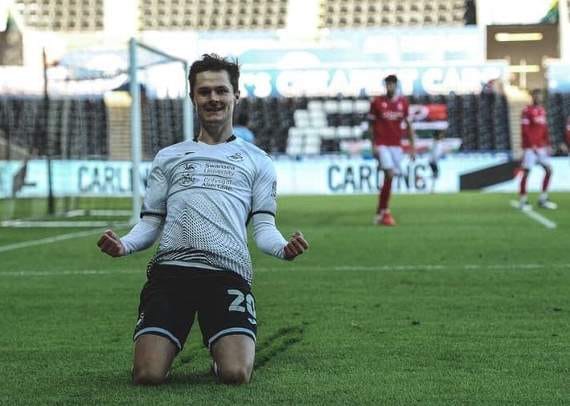 Kilgetty’s Liam Cullen helped secure Swansea City FC a place in the FA Cup fifth round and a plum home tie with Manchester City by netting a double on the weekend.

The former Tenby Greenhill School pupil and Wales Under 21s attacker opened the scoring during the Swans’ Saturday 5-1 hammering of Nottingham Forest at the Liberty Stadium.

Liam grabbed a second strike before unfortunately hobbling off before the end of the game after he was tackled in the box attempting to complete a hat-trick.

“Culls has deserved that. I said to him not so long ago that it’s just a case of those chances dropping for him, because we know he can take those chances,” he remarked.

“He’s done that for years in the academy, especially the under-23s recently, and we see him do it every day in training.

“He is a really good finisher and, although he made the finishes look comfortable today, they were not easy.

“That does not surprise us, but we were really pleased they fell for him as he is a great player, a great lad and part of what we are doing.”