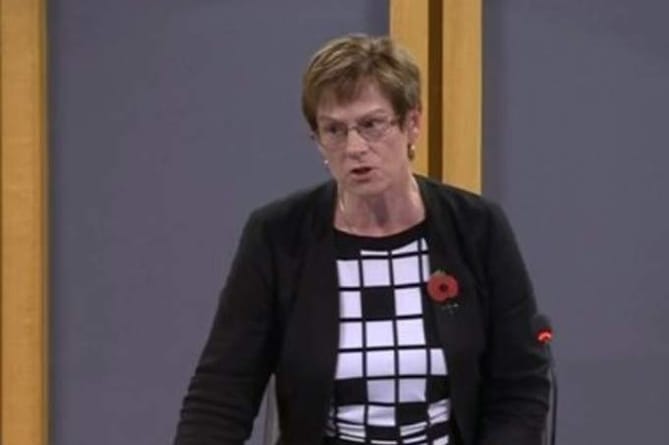 During Remembrance Week, Mid and West Wales MS Joyce Watson, who grew up in a military family based at Tywyn and Manorbier, championed the Veterans’ NHS Wales service and criticised the UK Government’s latest round of military spending cuts, at the Senedd question time on Tuesday.

First Minister Mark Drakeford talked about the planned closure of Pembrokeshire’s Cawdor barracks and echoed Mrs. Watson’s concerns, saying 45,000 personnel have been cut from the armed forces under Conservative UK governments since 2010.

Joyce Watson MS said: “Wales has traditionally provided disproportionate support to our armed forces, and that commitment and sacrifice needs to be honoured, especially this coming Remembrance Week.

“That is why your government’s increased funding for Veterans’ NHS Wales, providing mental health support to ex-service personnel, and for the position of armed forces liaison officers, is so important.

“But the Financial Times assessment of last week’s UK budget identified a real-terms drop of 1.4 per cent in the annual growth of day-to-day defence spending over the next four years—yet more Tory military cuts.

“Have you discussed that with UK Ministers, because the defence industry supports lots of good, high-skilled jobs in my region and Wales more widely, and we must protect the future and the quality of our armed forces’ footprint?”

Mr. Drakeford MS replied: “Joyce is right about the disproportionate contribution that Wales makes to the armed forces.

“We provide more and we get less. And I completely understand that she will be concerned about 14 Signal Regiment at Brawdy, and its future, given its significant contribution to the local community, economically and in other ways too.”

The First Minister continued: “Forty-five thousand personnel have been cut from the armed forces in the United Kingdom since the Conservative Party took over the UK Government in 2010, and their latest plans will see a further reduction in the size of the army to just 72,500 personnel by 2025.

“That will be the smallest size of the army in the United Kingdom since the eighteenth century – and lies behind the figures that the Member cited from the budget.

“I have had discussions with Baronness Goldie, the Minister responsible for the UK Government’s integrated review of armed services. We expect the result of that review to be published this autumn.

“I’m unable to confirm what the implications of that review will be for Wales, but I can certainly assure the Member that I made all those points about the need for the UK Government to go on investing here in Wales to recognise the contribution that Wales makes to the armed forces, and we look forward to seeing that recognised in the results of the review.”

The Veterans NHS Wales Service is the only national service of its kind in the UK for service-related mental health conditions. It supports dedicated therapists in every health board to improve the mental health and wellbeing of veterans.

In November 2016, the Ministry of Defence (MOD) announced that Cawdor Barracks would close in 2024.