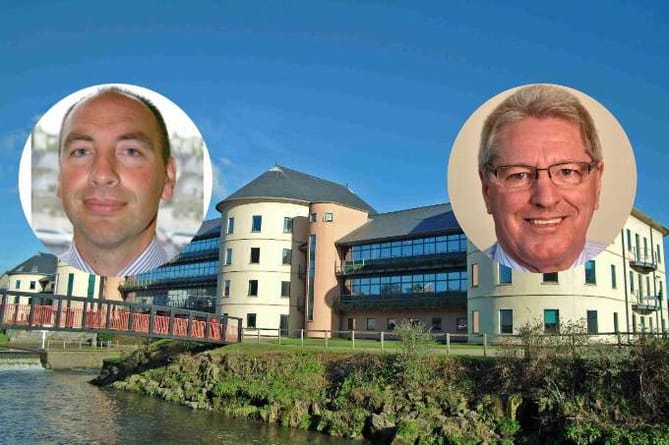 A review of the handling of last year’s departure of the county council’s chief executive – and the £95,000 payment he received – was published this week and a “serious breakdown in governance” was highlighted.

Former leader Clr. Jamie Adams responded to the report – while on a trip to South Africa – calling it “a damming judgement against the current coalition administration and its Leader.”

Clr. Adams, leader of the Independent group at County Hall, added: “The report clearly highlights unlawful decisions, blatant lack of accountability and transparency overseen and instructed by Clr. David Simpson and his administration.

“When you read the report it is blatantly obvious that Clr. David Simpson is doing his utmost to finger point the blame on others, whilst holding a smoking gun on the other hand, a clear sign of a guilty and weak Leader.

“Clr. Simpson now needs to go and make way to someone who commands the respect and confidence of the electorate and of the Council.”

A Pembrokeshire County Council spokesperson said: “The Council meeting which is scheduled for February 1, 2022 is the appropriate forum for this matter to be democratically debated in an open, public session.

“It would be inappropriate for further questions to be taken until that process has been followed.”

Labour group leader and cabinet member Clr. Paul Miller said the group is of the view that: “Clr. Simpson has and is doing an excellent job leading Pembrokeshire Council and he retains our full and absolute support and confidence.

“The electorate of Pembrokeshire will not have forgotten Clr. Adams tenure as Leader of the authority.”

Clr. Miller added: “It’s very disappointing that the process of agreeing the departure of the former Chief Executive was evidently flawed and disappointing also that the advice relied upon by the Leader to reach that agreement was, in the view of the auditor, also flawed.

“We’re obviously committed, as a Labour group, to ensuring the Council accepts and takes on board the auditors findings in order that we prevent mistakes in process like this from happening again.

“That said, it’s critical the authority has the right people, with the right skills, in the right roles to take the County forward and we’re encouraged at the team being assembled under the new Chief Executive.”