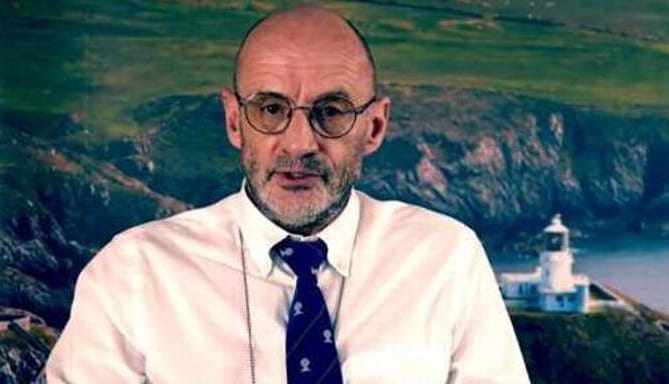 Evidence indicated that Mr. Westley (pictured) did not intend to take “early retirement” but was contemplating leaving “solely as a consequence of deteriorating relations arising from inappropriate Member behaviours which have not been addressed”.

A damning report into the unlawful £95,000 pay-off to Pembrokeshire council’s former chief executive states there was a “serious breakdown in governance.”

Audit Wales published its report on the circumstances surrounding the 2020 pay out today (January 13) stating the “termination payment” was incorrectly taken as an executive decision and “the payment was contrary to law.”

The report states that the “overall conclusion is that the process followed by the Council resulting in the payment is an example of a serious breakdown in governance.”

Highlighted are a failure to address and resolve relationship difficulties between members and officers – with allegations of bullying by cabinet members made by Mr. Westley – and a lack of clarity on respective roles and responsibilities.

Auditors found examples of officers failing to properly discharge their professional duties, disregard of external legal advice – with the head of human resources (HR) said to not have acted on external legal advice to clarify and document the basis on which Mr. Westley was leaving and why he was to receive payment – and failure to follow internal policies and procedures.

There was also “poor and untransparent decision making, failure to document and report the reasons for decisions, members of the Council not being given the opportunity to review and scrutinise the proposal, and failure to comply with legislative requirements,” it adds.

Carrying out the audit had been “complex” and was made more difficult by the failure of the council to “contemporaneously document the basis on which decisions were made” along with the differing recollections of events from those interviewed.

While there was consensus that one of the reasons Mr. Westley wanted to leave was “strained” relationships between him and some cabinet members some officers and the chief executive said the relationships had “irrevocably broken down.”

“Some, including the former Chief Executive, told my auditors that the difficulties were caused by poor member behaviour towards him over a sustained period, amounting to bullying and intimidation,” the report states,

“Others, including the Council Leader, maintain that whilst Cabinet members were robust in challenging and scrutinising the way in which the then Chief Executive was performing his role, he was not subjected to bullying,” it continued.

Questions were raised about whether the payment was to settle any employment claim that could be brought against the council but the auditor concluded the council deemed it unlikely such claim could be made.

Evidence indicated that Mr. Westley did not intend to take “early retirement” but was contemplating leaving “solely as a consequence of deteriorating relations arising from inappropriate Member behaviours which have not been addressed”.

Also recorded in the detailed report is the different recollection of events of the leader Clr. David Simpson and the head of HR about deciding a £95,000 payment could be given without the need to take it to full council.

It is noted that Clr. Simpson “made an error of judgement” not involving council officers with relevant professional expertise in negotiations surrounding the departure as they would have provided a documented audit trail under normal circumstances.

His amendment of a draft settlement agreement prepared by external legal advisors resulted in the council “being exposed to a potential tax liability” – with the first £30,000 paid tax free – and concerns raised with the monitoring officer about non compliance with statutory pay policy was not addressed

“The Council’s decision-making process in respect of the departure of its Chief Executive with a termination payment was fundamentally flawed and did not comply with legislative requirements,” the report adds.

It was found that head of HR and then monitoring officer should have sought further information to “establish the basis on which the Chief Executive was to leave his Council’s employment, the reason for the payment, and the business case to support the proposal. This information was essential to enable an informed decision to be reached on whether the proposal should be approved.”

Advice provided by the then head of legal and democratic services was also found to be incorrect by the auditor.

A number of recommendations are made for improvements, with the auditor adding he had confidence they will be addressed.

Following the release of the Audit Wales report, a spokesperson for the local authority said: “Pembrokeshire County Council welcomes the detailed report by Audit Wales into the settlement agreement with its former Chief Executive, and we recognise the seriousness of its findings.

“Significant progress has already been made in many of the areas identified in the Audit Wales review of events which took place over a year ago.

“The Council recognises that there is still more to be done.

“A comprehensive improvement programme was established last year to address observations originating from external and internal reviews commissioned by the Council.

“The Auditor General’s report, other associated reports and an action plan to address recommendations will be considered by a meeting of the Council on 1st February 2022.”

The Audit Wales report is available at: https://www.audit.wales/news/process-led-departure-payment-chief-executive-pembrokeshire-county-council-represented-serious