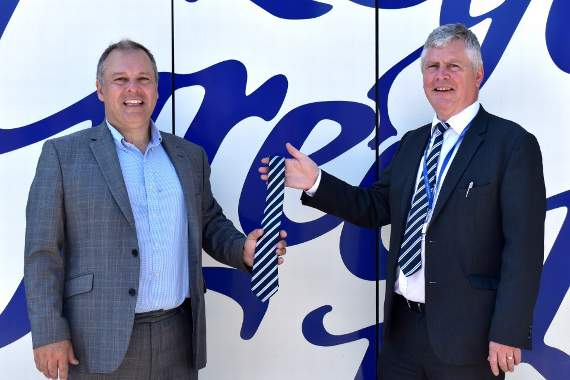 The head of Tenby’s secondary school has farewell to the facility as term ended for the summer this week.

Ex-military engineer, Ray McGovern, who had a comprehensive background in teaching, was appointed head of Greenhill School back in 2017, following the departure of retiring headteacher Janet Kingston.

Stepping into the role at Tenby on an interim basis will be Mr. David Haynes, who was most recently head at Ysgol Penrhyn Dewi in St Davids. This will allow for the process of appointing a permanent head teacher to be undertaken and completed.

Mr. Haynes, has been teaching in West Wales for over 30 years and knows the area better than most, having been given his PGCE from Swansea University in 1991 before taking his first job as a geography teacher in Milford Haven.

Science at Sea with the tall ship Johanna Lucretia

After moving to Fishguard to become head of geography, and spending 13 years on the north side of the peninsular, Mr. Haynes made his third and most recent move, to settle in St Davids.

On his depature, Mr. McGovern thanked everyone at Greenhill for their ‘support and commitment’ to the school throughout the last 16 months during the pandemic.

“In addition to managing and adapting to life with Covid-19 we have continued to work hard to address the recommendations from Estyn in our Post Inspection Action Plan,” he said.

“Whilst the disruption of the pandemic delayed our implementation of some aspects of our plans, progress has been made in many areas.

“Estyn have recognized this during its most recent monitoring visit, which took place between July 12 to 14.

“I would like to thank all of the staff for their hard work throughout the year but especially in managing the work related to the Centre Determined Grades, planning for the implementation of the new curriculum, preparing for the introduction of the Additional Learning Need programme as well as an Estyn monitoring visit,” he continued.

“The pandemic has without doubt had an impact on everyone’s life. For some this has led them having to change their long-term plans.

“This has been the case for me. It had been my plan to remain at Greenhill until I was due to retire in April 2022.

“However, the pandemic has resulted in changes to my personal circumstances and as a result I have made the decision that it is now time to leave and attend to other life priorities.

“My priority during the past few months has been to provide stability and certainty, as the school recovered back to more normal operating conditions and to prepare for the monitoring visit we knew Estyn were planning.

“Along with the agreement of the Director of Education, it was felt best to delay any announcement about my departure until the monitoring visit was completed.

“I regret the short notice, but I hope everyone will appreciate the consideration given to maintaining as much certainty and stability as possible at a time of such turmoil.

“My only regret is that I do not find myself in the position of being able to continue in post long enough to see the hard work of our school community recognized by being removed from Special Measures, which I am confident will be the case in the very near future.

“I would like to say thank you to the school’s Governors and my current Senior Leadership team for their help, support, and encouragement over the past 4 years.

“I would also like say a special note of thanks to Deputy Head Teacher, Matthew Davies for all he has done for me and the school. He is a colleague and friend to whom I could always turn and trust.

“I would like to thank the Director of Education for his support and kind consideration since he took up his role and particularly at this critical time of transition.

On Mr. Haynes’appointment, Mr. McGovern commented: “I know his passion, positive energy, and comprehensive knowledge of all things Pembrokeshire will be a real asset to the school community.

“Mr. Haynes already knows the school well, and he was able to meet and speak with a number of old acquaintances.

“It was also a good opportunity to present him with one of our school ties as a symbolic transfer of headship.

“Whilst I wear the same tie as students every day, I don't know if Mr. Haynes will choose to do the same. Whether he does or not, I know he will be made welcome.

On saying farewell to Greenhill school, Mr. McGovern said: “It has been a scorching end to the term, and it was good to be able to end proceedings with a Health and Wellbeing day.

“In addition to my own departure at the end of this term, we say farewell to Miss Peckham (P.E.), Miss Chesterton (Learning Coach), Mrs. Harries (ALNCo.) and Mrs. Morgan (P.E.). Mrs. Swales will also be changing her role, stepping down from her Senior Leadership position.

“Mrs. Swales will continue to teach Welsh. On behalf of our school community, I would like to thank these colleagues for their service and commitment to Greenhill down the years, and to wish them well for the future.

“I hope it will be successful and fulfilling. I would also like to thank Mrs. Blazey, who has served as a Governor at the school for a number of years, for the contribution she has made to the work of the Governing body.

“Finally, I would like to wish everyone a safe and enjoyable summer break,” he added.