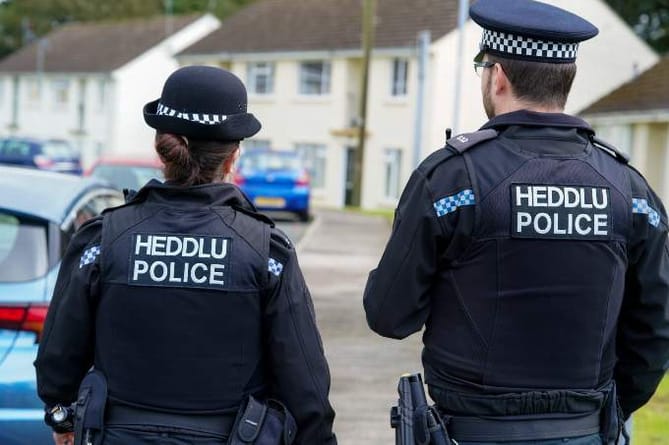 DYFED-POWYS Police has issued an appeal for the public to ‘work with us - not against us’ after a number of assaults on emergency workers in the past couple of weeks.

In Pembrokeshire, police officers were called to a disturbance in Monkton on December 9, and when they arrested a man, he kicked one officer and butted another.

The plea also comes after a man who plunged at a police officer following a disturbance was sentenced to 120 hours of unpaid work.

Officers had attended a disturbance in Spilman Street, Carmarthen, on the evening of Saturday, December 11, over reports of 20 people fighting.

When officers arrived, the situation had calmed slightly to pushing and shoving.

Officers were speaking to those involved and initially spoke with Robin Pitt, aged 40, who appeared calm.

However, when officers were dealing with another male, Pitt lunged at one of them from behind with his arm out.

PC Chris Day, who witnessed Pitt’s charge, stepped in to stop a potential assault on a colleague.

“He grabbed me so I’ve grabbed him and then he’s wrapped his arms around my head.

“When he took me to the ground I smashed my left knee into the floor causing several grazes and bruising.

“He landed on top of me, so I cut my hand while trying to get him off and some reddening to the left eye.

“There were abrasions on my face from all the struggling, it was like sandpaper on my face.”

PC Day said the assault had been unprovoked.

“It was out of the blue,” he said. “As I first attended I spoke with him and he was fine and calm with me.

“No-one ever expects to be assaulted when they go to work.

“As a police officer, you expect to deal with violent offenders, but we’re just doing our job and should not be attacked for doing it.”

Pitt admitted the assault at Llanelli Magistrates Court on 13 December.

This month Dyfed-Powys Police is supporting the emergency services’ #WithUsNotAgainstUs campaign being led by the Welsh Ambulance Service.

In one week this month, eight assaults were recorded on police or paramedics in the force area.

It is part of a rising trend, which has seen more than 4,240 assaults committed against emergency workers, including police, fire and ambulance crews, in the period April 2019 to November 2020. This represents a monthly average increase from 202 in 2019 to 222 in 2020, or 10 per cent.

In 2018, the maximum sentence under the Assault on Emergency Workers (Offences) Act was doubled from six months to 12 months in prison, but criminals could soon face up to two years in prison under new laws.

Officers were called to a woman damaging a car in the Kidwelly area on December 9. Once arrested, the woman lashed out kicking two officers to their legs.

When making an arrest in Llanelli on December 12, two officers were assaulted - one had their hair pulled, while the other was bitten on their hand.

On December 12 officers were called to Llanelli after a paramedic had been punched in her stomach by a patient in an ambulance.

Officers called to concern for the welfare of a man in the Aberystwyth area on 12 December. The man was located and offered support by officers but became abusive to an officer, include racial comments.

On December 14 officers were called to Prince Philip Hospital in Llanelli to reports of an intoxicated man with a child, who then refused treatment for the child.

He was found in a car outside, and when approached by officers became aggressive, squaring up to officers and bystanders, swearing at them. He then lunged at an officer, spitting in their face. Once he was in a police custody suite, he again lashed out at another officer, kicking them to the shin.

On December 14 officers attended a property in Carmarthen and spoke with an occupant who lashed out at officers and had to be restrained. Two officers were kicked to their legs during the disturbance.